Now I've heard there was a secret chord
That David played, and it pleased the Lord
But you don't really care for music, do you? 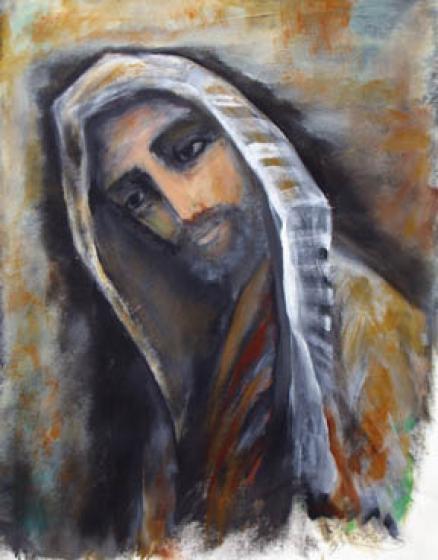 KHIRBET QEIYAFA, Israel — Overlooking the verdant Valley of Elah, where the Bible says David toppled Goliath, archaeologists are unearthing a 3,000-year-old fortified city that could reshape views of the period when David ruled over the Israelites. Five lines on pottery uncovered here appear to be the oldest Hebrew text ever found and are likely to have a major impact on knowledge about the history of literacy and alphabet development.

The five-acre site, with its fortifications, dwellings and multi-chambered entry gate, will also be a weapon in the contentious and often politicized debate over whether David and his capital, Jerusalem, were an important kingdom or a minor tribe, an issue that divides not only scholars but those seeking to support or delegitimize Zionism.

Only a tiny portion of the site has been excavated, and none of the findings have yet been published or fully scrutinized. But the dig, led by Yosef Garfinkel of Hebrew University in Jerusalem, is already causing a stir among his colleagues as well as excitement from those who seek to use the Bible as a guide to history and confirmation of their faith.

“This is a new type of site that suddenly opens a window on an area where we have had almost nothing and requires us to rethink what was going on at that period,” said Aren M. Maeir, professor of archaeology at Bar-Ilan University and the director of a major Philistine dig not far from here. “This is not a run-of-the-mill find.”

The 10th century B.C. is the most controversial period in biblical archaeology because it is then, according to the Old Testament, that David united the kingdoms of Judah and Israel, setting the stage for his son Solomon to build his great temple and rule over a vast area from the Nile to the Euphrates Rivers.

For many Jews and Christians, even those who do not take Scripture literally, the Bible is a vital historical source. And for the state of Israel, which considers itself to be a reclamation of the state begun by David, evidence of the biblical account has huge symbolic value. The Foreign Ministry’s Web site, for example, presents the kingdom of David and Solomon along with a map of it as a matter of fact.

But the archaeological record of that kingdom is exceedingly sparse — in fact almost nonexistent — and a number of scholars today argue that the kingdom was largely a myth created some centuries later. A great power, they note, would have left traces of cities and activity, and been mentioned by those around it. Yet in this area nothing like that has turned up — at least until now.

Mr. Garfinkel says he has something here that generations have been seeking. He has made two informal presentations in the past month to fellow archaeologists. On Thursday he will give his first formal lecture at a conference in Jerusalem.

What he has found so far has impressed many. Two burned olive pits found at the site have been tested for carbon-14 at Oxford University and were found to date from between 1050 and 970 B.C., exactly when most chronologies place David as king. Two more pits are still to be tested.

A specialist in ancient Semitic languages at Hebrew University, Haggai Misgav, says the writing, on pottery using charcoal and animal fat for ink, is in so-called proto-Canaanite script and appears to be a letter or document in Hebrew, suggesting that literacy may have been more widespread than is generally assumed. That could play a role in the larger dispute over the Bible, since if more writing turns up it suggests a means by which events could have been recorded and passed down several centuries before the Bible was likely to have been written.

Another reason this site holds such promise is that it was in use for only a short period, perhaps 20 years, and then destroyed — Mr. Garfinkel speculates in a battle with the Philistines — and abandoned for centuries, sealing the finds in Pompeii-like uniformity. Most sites are made up of layers of periods and, inevitably, there is blending, making it hard to date remains accurately.

For example, several years ago the archaeologist Eilat Mazar uncovered in East Jerusalem a major public building from around the 10th century B.C. that she attributes to David’s time and was perhaps even, she believes, his palace. While she found pottery, it was in a fill, not sealed, making it hard to know how to relate the pottery to the structure.

Still, how this new site relates to King David and the Israelites is far from clear. Mr. Garfinkel suggests that the Hebrew writing and location — a fortified settlement a two-day walk from Jerusalem — add weight to the idea that his capital was sufficiently important to require such a forward position, especially because it was between the huge Philistine city of Gath and Jerusalem.

“The fortification required 200,000 tons of stone and probably 10 years to build,” he said as he walked around the site one recent morning. “There were 500 people inside. This was the main road to Jerusalem, the key strategic site to protect the kingdom of Jerusalem. If they built a fortification here, it was a real kingdom, pointing to urban cities and a centralized authority in Judah in the 10th century B.C.”

Others say it is too early to draw such conclusions. “This is an important site, one of the very few cases from the 10th century where you can see a settlement fortified in a style that is typical of later Israelite and Judean cities,” said Amihai Mazar, a professor of archaeology at Hebrew University. “The question is who fortified it, who lived in it, why it was abandoned and how it all relates to the reign of David and Solomon.”

The Philistines had a huge city, Gath, some seven miles away, but pottery found there looks distinct from what Mr. Garfinkel has found here. He says the David and Goliath story could be an allegory about a battle between the two. Seymour Gitin, an archaeologist and a director of the Albright Institute in Jerusalem, a private American institution, who has seen the finds, said: “The real value is that there was an urban center in the 10th century. You can extrapolate and say this helps support a kingdom, a united monarchy under David and Solomon. People will rightly use this material to support that.”

That is happening. Financing for the dig is now being raised by an organization called Foundation Stone, run by a Los Angeles-born Israeli named David Willner, who lives in the West Bank settlement of Efrat and said the point of his group was “to strengthen the tie of the Jewish people to the land.” The group’s Web site says that it is “redrawing the map in Jewish education,” and that its activities are “anchoring traditional texts to the artifacts, maps and locations that form the context for Jewish identity.”

This is an approach to unearthing the land’s past that disturbs Israel Finkelstein, an archaeologist at Tel Aviv University and a prominent skeptic toward a Bible-based historical chronology.

“Some of us look at things in a very ethnocentric way — everything is Israelite or Judahite,” he said. “History is not like that. There were other entities playing a big role in the southern part of the country. And even if it belongs to Jerusalem, fine. So there is a late 10th-century fortified structure there. I don’t believe that any archaeologist can revolutionize our entire understanding of Judah and Jerusalem by a single site. It doesn’t work that way. This is a cumulative discipline.”

It is also a divided one. Mr. Finkelstein is among the most prominent advocates of what is called the “low chronology,” meaning those who date David and Solomon’s rule to closer to 900 B.C. than 1000 B.C. They argue that the kingdom was a minor affair that a later generation of Israelites in the seventh century B.C. mythologized for its own nationalistic purposes.

Ilan Sharon, a radiocarbon expert at Hebrew University, said another problem was that “we are working very close to the limits of measurement accuracy” when dealing with 3,000-year-old objects like olive pits.

He added in an e-mail message: “A measurement is expected to be within about 50 years of the correct date two-thirds of the time and within a century 95 percent of the time.” Given how hard it is to be sure that objects found near the tested items were from the same time, “you can see that this is a statistician’s nightmare.”

Put another way, basing an understanding of history on two olive pits — or even four — is risky. What is needed, he added, are scores or even hundreds of samples. Mr. Garfinkel is not arguing about that. He says with some 96 percent of this site still to be unearthed, a process likely to take 10 years, he hopes that more writing, more olive pits and more pottery will be uncovered, and add depth to what he believes is a revolutionary find.
Posted by BabbaZee at 12:17 PM